Open to the Public Daily (no reservations required) | Free of Charge | Located on Route 3.

Colorful plants in full bloom bring this informal garden to life, naturally attracting bees, butterflies, and birds of many species.

Click or tap on an image to enlarge, and show a slideshow if you wish 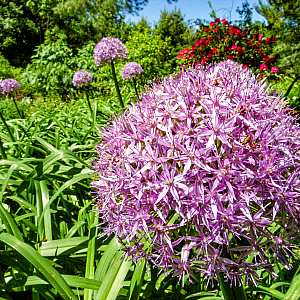 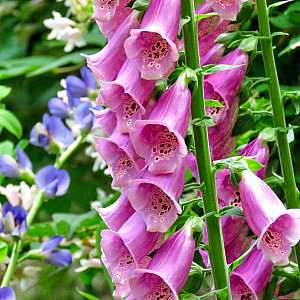 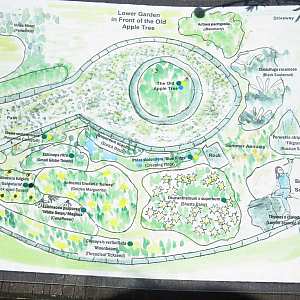 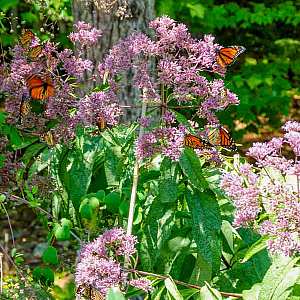 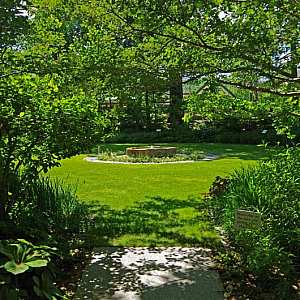 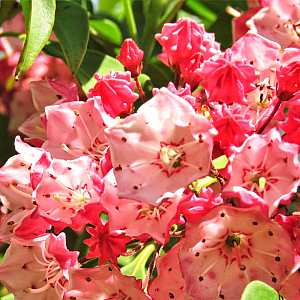 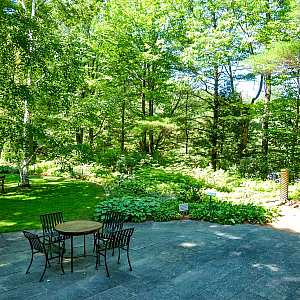 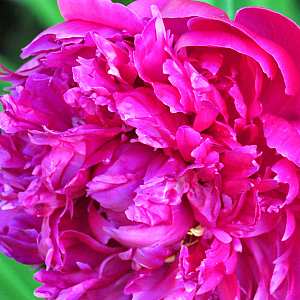 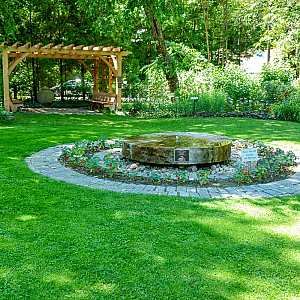 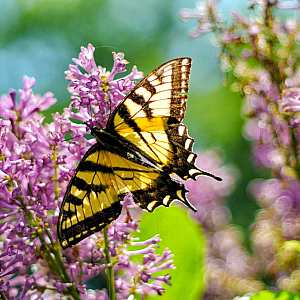 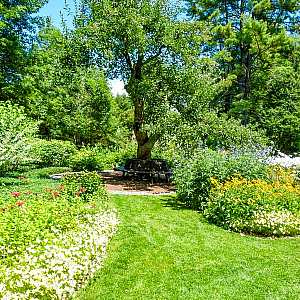 The History of Kirkwood Gardens

“Sunny” Grace Kirkwood, a landscape designer who served on the Board of Trustees for the Science Center from 1985 to 1991, designed a one-acre garden on the grounds of the historic Holderness Inn. The garden includes both shade and sun beds planted with a wide variety of trees, shrubs, ferns, and flowers adapted to the northern New England climate. Plants that are attractive to birds, bees, and butterflies are central to the garden’s design.

More than 200 people attended the August 31, 1996 dedication of Kirkwood Gardens, none more excited than Sunny Kirkwood herself, to whom the gardens were dedicated. Sunny Kirkwood died peacefully at her home in North Sandwich on September 17, 1996.

Some highlights of Kirkwood Gardens include a 25- by 60-foot bluestone patio on the west side of the historic Holderness Inn, which provides a scenic view for pedestrians or a place to sit in the summer shade.

A series of granite steps lead visitors from the shaded upper garden to the sunny, informal lower garden. Visitors may sit in the shade under ancient sugar maples and view the large variety of ferns, hostas, azaleas, rhododendrons, and other shade-loving plants in the upper garden. 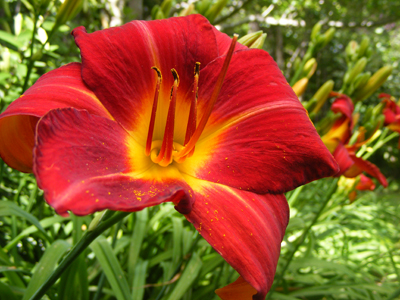 Sun-loving shrubs, trees, and perennials thrive in the lower garden, where visitors may enjoy a lovely sculpture, set their clocks by the sundial, watch the hummingbirds from a circular bench under the old apple tree, or view birds and butterflies as they visit a central millstone fountain.

A beautiful wooden pergola covered with a variety of vines is located at the west end of the lower garden. A combination of cobbles, pavers, and river stones provide the surface under the pergola and highlight a large Lunaform pot in the planting bed beyond it.

Kirkwood Gardens are generously sponsored by:

Recently, I interviewed Brenda Erler, Squam Lakes Science Center’s Gardens and Exhibits Assistant, about the history of Kirkwood Gardens. I learned a great deal about the gardens and Grace “Sunny” Kirkwood, the woman who designed them.

I remember putting a plant in soil and watching it grow when I was in middle school, after my grandmother gave me a grow-your-own-amaryllis kit for Christmas. Watching a magnificent red flower rise from dirt was a rewarding experience and a reminder of how fascinating the natural world can be. Nevertheless, I haven’t planted anything since then so when it comes to gardens, I am a novice. Sunny Kirkwood, on the other hand, was an accomplished green-thumbed artist, who became an internationally-known landscape designer.

Kirkwood was from Boston, Massachusetts. While she didn’t always know she wanted to garden (she actually had a strong interest in becoming a gym teacher), she developed a passion after assisting a neighbor design a garden for the neighbor’s yard. As a result, she went to design school for landscaping. She rebuilt the kitchen garden at Mount Vernon and helped design several gardens in the Boston and Harvard areas of Massachusetts. When her husband, Samuel B. Kirkwood, was required to go to the Middle East to help with the formation of a medical plan, Kirkwood went with him. She did a variety of landscaping jobs while she was there, and even designed for such individuals as the Shah of Iran and several other Middle Eastern leaders and royals. She was in the strange position of being a female giving orders to men in the Middle East. She said she felt like a “museum piece.” While she eventually left the Middle East when her husband was targeted as a kidnap victim by Islamic terrorists, she continued to help with Middle Eastern landscaping and garden design. In fact, Brenda recalls visiting Sunny to question her about the design of Kirkwood Gardens, when the conversation was interrupted by a call from the Tehran Hilton asking Sunny where to place palm trees in the Hilton courtyard. 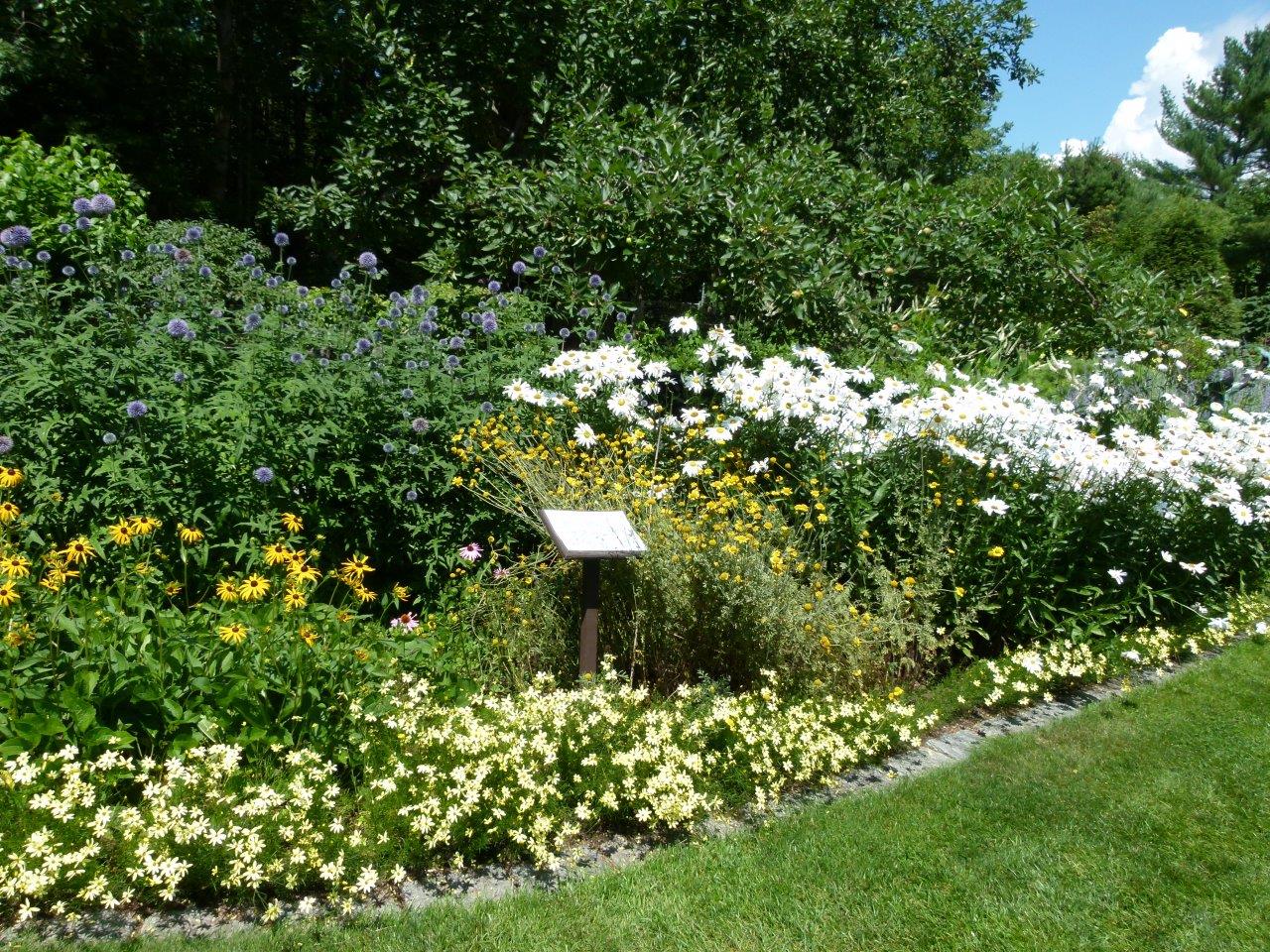 After leaving the Middle East, Sunny Kirkwood and her husband moved to North Sandwich, New Hampshire, where her father had taken her every summer during her childhood. The time spent in Sandwich helped to develop her lifelong love of plants and the outdoors. She was a member of the Board of Trustees at the Science Center from 1985 to 1991. Eventually, she was asked by Bessie Wood, another board member, to come up with ideas for using the abandoned parking lot off of Route 3. The site had been the Science Center’s original parking lot, and before that property of the Holderness Inn, which was then a gift shop called the Nature Store. Sunny was ill at the time and declined. Some residents of Holderness came up with some pretty unorthodox possibilities, such as a dachshund breeding facility. Executive Director Will Abbott asked Sarah James and Associates, a sustainability-focused consulting firm offering services in city/town planning and community development and William Hoffman, a landscape architect from Pittsfield, for suggestions. They came up with three possibilities, which were a butterfly conservatory, an amphitheater for outdoor programs, and a garden center. The amphitheater idea wasn’t practical for that spot because it was so close to the road and would have been noisy. The garden center was chosen. By then Kirkwood was well enough to take on the project.

Sunny’s control over the project, beginning in 1995, made it special for a few reasons. First, she had a wide variety of gardening experiences and was an incredibly good designer. Furthermore, Kirkwood used a lot of interesting plants. She had been in the Middle East for so long that she had to base her plant selection on what she remembered from her youth. As a result, the gardens ended up with plants that were not propagated as much as they were in previous decades, making them unique and beautiful selections. She also found plants that had been growing near the abandoned inn nearby and incorporated those into the gardens. Next, Sunny never liked to do the same thing twice and didn’t like anything to be uniform in her gardens because she wanted them to mimic nature. Thus, the pergola is situated at an angle with the rest of the garden. 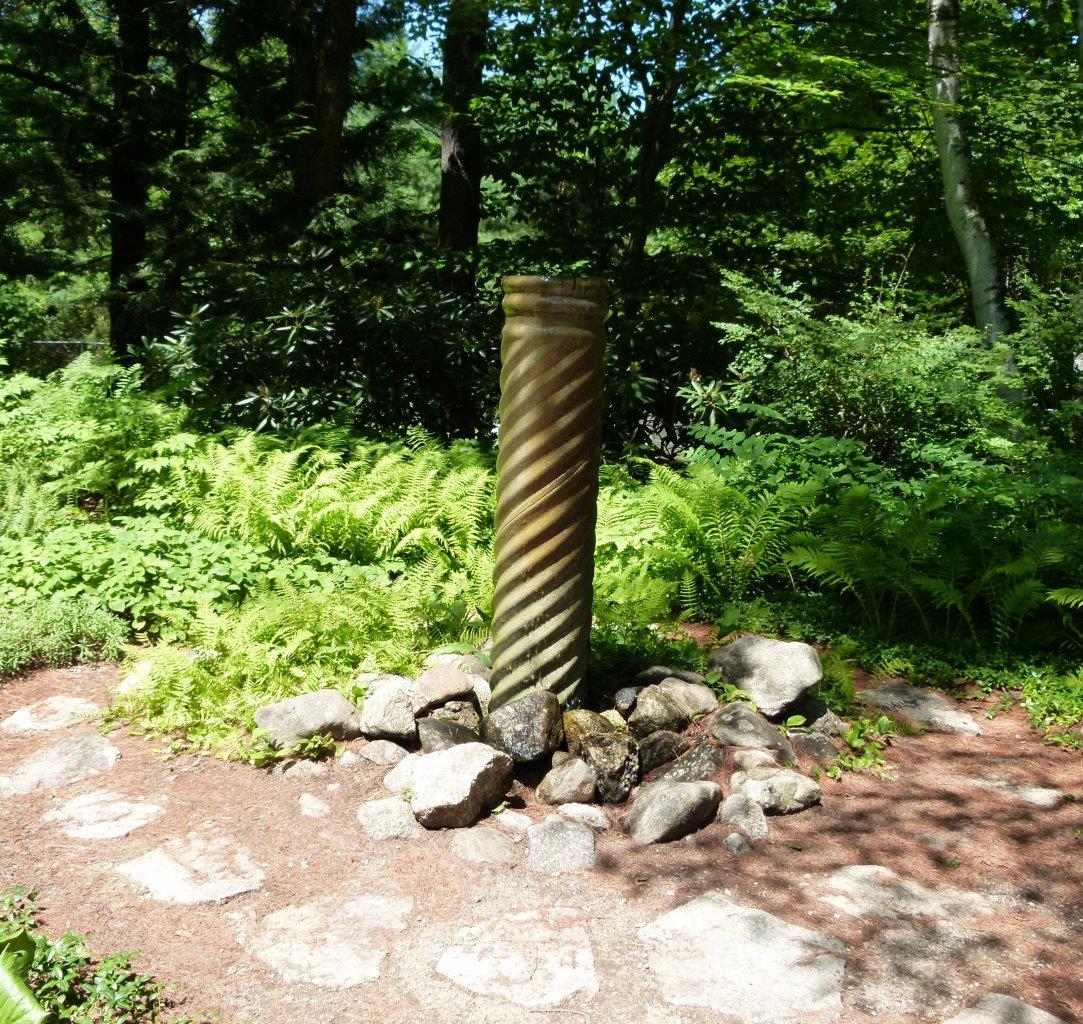 The fountain in the upper garden is atypical, making the garden a little bit whimsical, and much more natural than a formal garden would be. The fountain is a vertical pipe. It’s a controversial feature, which people seem to either love or hate. While some might not like it, it won’t be going away anytime soon because Sunny loved it and said it was exactly what she wanted. Finally the gardens were the last ones created by Sunny, so they stand as conclusion of her impressive legacy.

Sunny Kirkwood designed the gardens meticulously. Brenda explained that Sunny would specify exactly how many of each plant she wanted and where she wanted them planted. In order to get the plants for the upper garden, lists of what were needed were sent out to the full membership and most were donated. Sunny would be brought to the gardens by her nurse where she would sit and direct volunteers and staff. It was harder to get materials for the lower garden, because those working on the project had already asked everyone they knew for the plants used in the upper garden. The gardens’ stonework was put in by AmeriCorps volunteers. Swenson Granite also donated a lot of it and some of it was purchased by the Science Center. The pergola, steps, and benches were paid for individually by donors. George Carr, a Science Center trustee, wrote a grant to the New Hampshire Landscape Gardeners Association, a group that takes on one non-profit project each year. Brenda says they were thrilled to help. Hayden McLaughlin of Belknap Landscape Company took charge at that point and organized many other landscapers and nurseries around the state. They all came one day in 1996 and planted the majority of the plants in the lower garden. 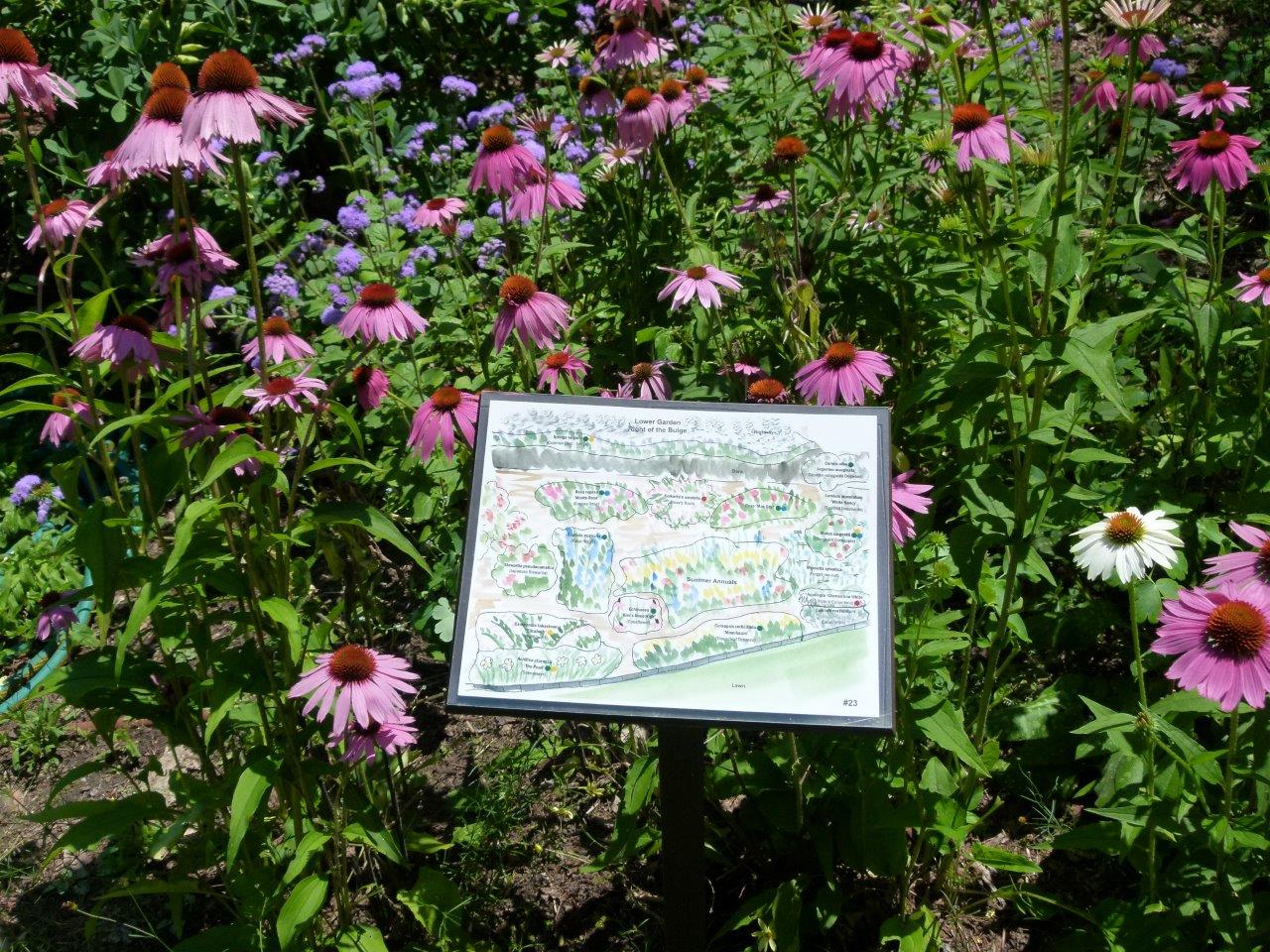 From then on, it was up to Squam Lakes Natural Science Center to maintain Kirkwood Gardens. Brenda credits “the blood, sweat, and tears of a lot of volunteers” with making that possible from its creation through the present. She became the “point person” because she was very enthusiastic about it. As someone who loves to garden, Brenda felt Kirkwood Gardens was a great opportunity, and she continues to maintain them today. Brenda also says that, while some Holderness residents were unsure about the project at first, Kirkwood Gardens has become a source of pride for the town. New and returning visitors are both common to see in there, and one might even see someone painting or practicing tai chi in the morning. The gardens also serve as an educational area, with color-coded maps and cards that teach people about which plants attract which wild creatures. 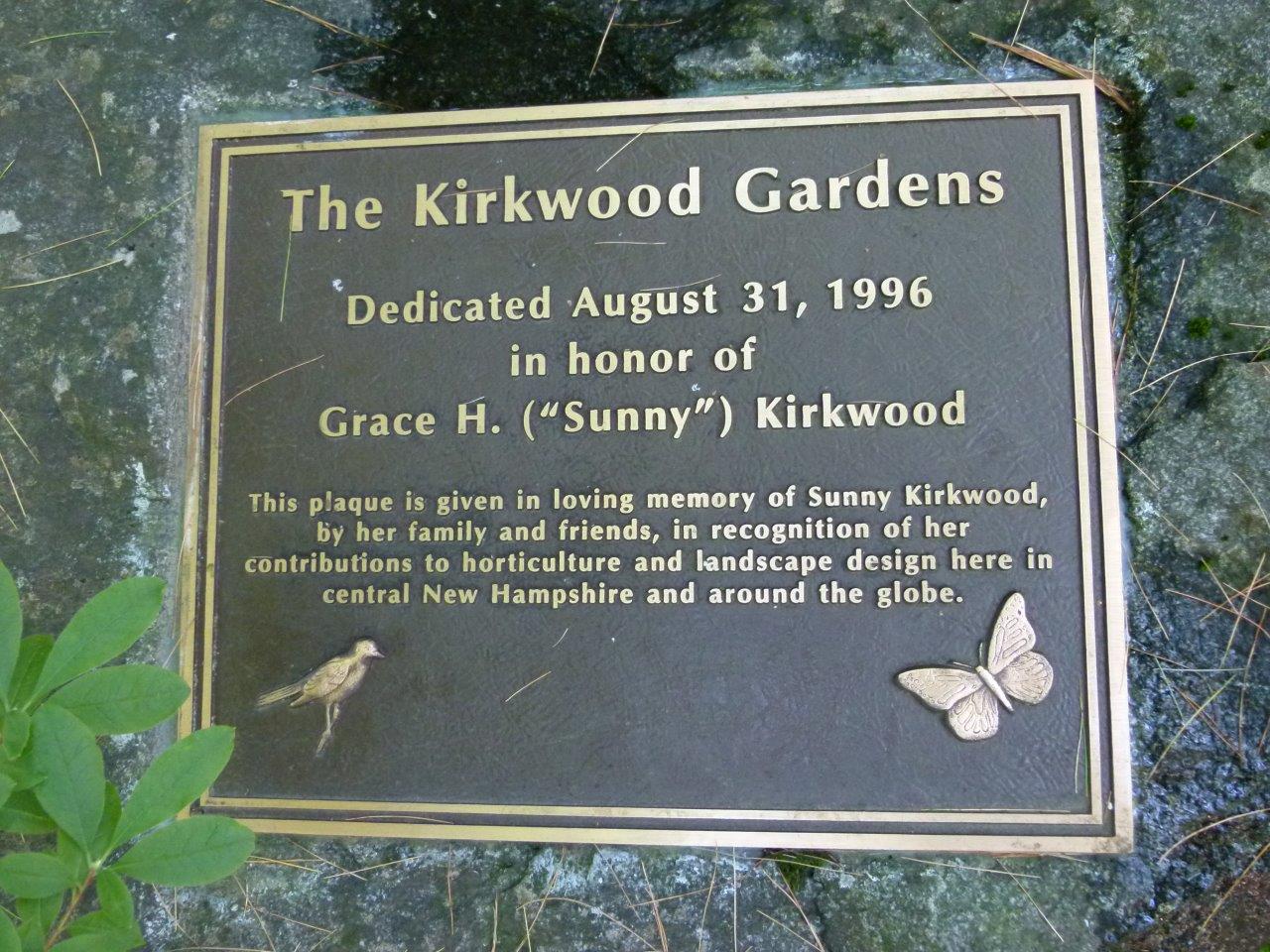 When the dedication ceremony took place, late in the summer of 1996, Sunny was in such poor health that she had to be brought to the ceremony by ambulance, but it was very important to her that she attend, and she did. That was when she expressed her enthusiastic approval of the fountain in the upper garden. Brenda showed me a picture of her at the dedication, with her daughter beside her, a week or two before she passed away after having a nice lobster dinner with her family. According to a speech by trustee Carol Thompson in 1997, Diana Horton, Sunny’s daughter, gave a funny speech about her mother at the event and Sunny loved it. The speech also describes Sunny as someone who was “everyone’s picture of an ideal grandmother” and was kind, patient, and had a great sense of humor.

I asked Brenda why she thinks it’s important for there to be free public gardens, and her response covered many different reasons. Public gardens give people ideas for what they can do in their gardens at home. Kirkwood Gardens specifically is great inspiration for anyone who wants to learn how to mix native and non-native plants to best attract birds and butterflies. Kirkwood Gardens also provides people with a place to escape the worries and cares of daily life and just relax. It’s a place where kids can spend some time outdoors. Its educational capacity makes it very important as well. Plus, as Brenda says, “Let’s face it; everybody needs more beauty in their life and it certainly delivers that.” Though she chuckles at herself as she says it, Brenda deems the gardens a “sanctuary for the soul” and I’m inclined to agree with her.